If you or a loved one has been injured by a Semi-Truck, don’t call the trucking company’s insurance company, call the Scott Ray Law Firm! 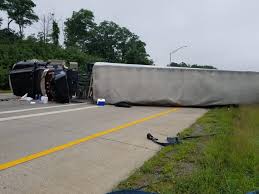 Some call them Semi-Trucks, Tractor Trailers, Commercial Trucks, or simply Big Rigs.  Regardless of what you call them, when you are hit by one, it can be devastating.  When a car hits a motorcycle, the motorcycle always loses.  When a Semi hits a car, the car always loses.  Semi-trucks are dangerous because they are so big and so heavy.  They don’t stop as fast as a car.  They don’t turn as easily as a car.  However, they can drive as fast as a car and they weigh much, much more than a car.  Those are just some of the reasons that the federal government and most state governments have enacted laws and regulations to try to make sharing the road with big rigs safer.  An example of such a regulation is one that limits the number of hours a big rig can be driven by a driver without sufficient rest.  In fact, federal regulations require semi drivers to keep logs specifying their driving time and their resting time.  A tired or drowsy driver is a dangerous driver.  It is because of the multitude of laws and regulations that make big rig crash claims challenging for all but experienced big rig lawyers such as the Scott Ray Law Firm.  It is amazing, but true, that we have never, ever had a single big rig crash case where all of the federal regulations were met.  Not a single case.  Why is that?  Let’s look at some of the reasons.

Trucking companies make their money by getting products from point A to point B.  The more products they can move, the more money they make.  However, with the federal and state safety rules, it makes it harder for trucking companies to make more money.  If they could drive their trucks at 100 mph, they could get their products from point A to point B faster and thus make more money because they can make more trips in the same amount of time.  Speed limits make it illegal to drive their trucks that fast.  Thus, the trucking company can either buy more trucks and hire more drivers (both at a substantial cost to the company’s bottom line) or the drivers can simply drive their big rigs faster than allowed.

Another example is the Hours of Service regulations.  For those semi trucks that come under the regulation, the drivers are limited to the number of hours they can drive.

Virtually every big rig case that has been handled by the Scott Ray Law Firm, we have been able to prove that the Hours of Service regulations have been violated.  Why?  If trucking companies force their drivers to drive over the Hours of Service limit (and have them create fake log books so the highway patrol won’t catch them), they can get more products from point A to point B without having to add more trucks and drivers to their fleet.  In other words, breaking the safety rules results in more profit for the big trucking companies.  Don’t let them get away with it.

It is amazing the lengths trucking companies will go to coverup their violations of those regulations.  In a case we handled involving the death of 4 family members and injuries to two others, the trucking company produced its Hours of Service log books showing that the semi truck driver had not exceeded the maximum time he could be driving.  However, after further investigation, we were able to prove that if the log book was accurate, the semi truck averaged almost 100 mph for the entire trip!  In response, the semi truck company claimed that its trucks had factory installed governors that prevented its trucks from going more than 65mph.  We were able to obtain documents from the manufacturer of the trucks showing that the trucking company had, in fact, refused to purchase the governor for its fleet of trucks.  Since we were able to prove that either the log book was a fraud and the driver had violated the Hours of Service regulations or the driver was violating the speed limit and driving almost 100mph for hours.  Their actions cost the trucking company millions. Unfortunately, it could not give life back to the four people killed in the crash.

If you or a loved one has been injured by a big rig, don’t call the trucking company’s insurance company, call the Scott Ray Law Firm at 580-248-5557.